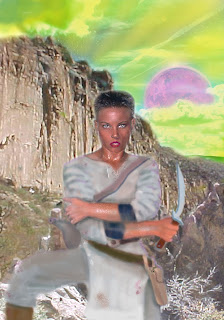 I know I've been more sporadic than ever with posting prompts, but I must confess--the characters in my Beyond the Fifth Gate sequel have taken me captive! The working title for the new book is Lost Cantos and I'm loving the creation process--but it certainly is time consuming. In the meantime, I just have to post a prompt.

Pumping Your Muse Prompt:
It's been awhile since we've done a three word writing prompt. I have a fondness for them because such a prompt was behind one of the first stories I ever had published. The idea is to use these three words in a story:

Posted by Donna Sundblad at 5:33 PM

Donna Sundblad
Donna Sundblad -- Sundblad has been a blogger for more than 15 years. She currently has a few active blogs, a couple for writers and another that takes a deeper look at wedding traditions, the history behind them, and how to make them unique for couples today. Sundblad is the author of several fantasy novels, has worked as an editor, ghostwriter, and is currently working on her Dragonborn fantasy series. For more information visit her website at https://donnasundblad.wordpress.com/.